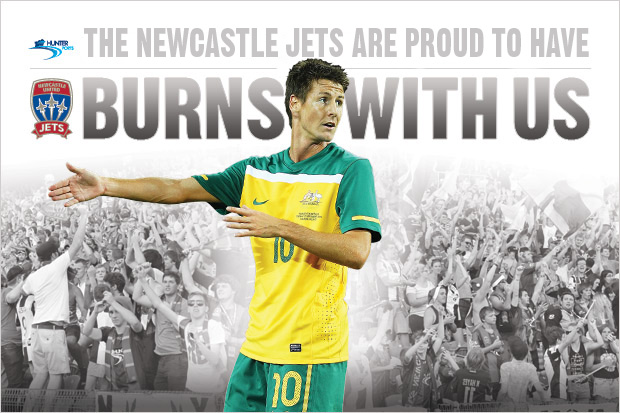 The Newcastle Jets are pleased to announce the signing of Nathan Burns on loan from K-League Club Incheon United.

The Hunter Ports Newcastle Jets are pleased to announce the signing of Nathan Burns on loan from K-League Club Incheon United.

Burns- loan deal will commence on September 1, 2013 following the conclusion of the K-League regular season.

The 25-year-old forward will remain with the Jets until January 11, 2014 at which time he is scheduled to return to Incheon United.

Burns burst onto the scene with a number of eye-catching performances for Adelaide United during two seasons in the A-League and the Reds- 2008 Asian Champions League campaign.

He scored 12 goals in 37 A-League and Asian Champions League appearances for Adelaide before being signed by Greek giants AEK Athens in 2008.

After four seasons at AEK Athens, including a loan spell at Kerkyra where he was their top scorer, Burns completed a move to Incheon United in 2012.

Burns has played for the Socceroos on seven occasions, including being part of Australia-s squad at the 2011 AFC Asian Cup in Qatar.

Burns said he is excited to be joining the Jets and is looking forward to linking up with his new teammates once the loan deal commences.

“Newcastle is a big Club with good support and I-m really looking forward to playing in front of the fans,” Burns said.

“I really want to get back playing and get back into a good team environment and I think Newcastle has that.

“They have some fantastic experience and very good young players so I look forward to fitting in with them and helping the team win.

“The Club showed a lot of interest in me from the start and when you get that commitment and that level of interest it kind of inspires you to go there.”

Jets CEO Robbie Middleby said the Club is delighted to bring a player of Burns’ calibre back to the A-League.

“Nathan is a fantastic addition to our squad and will really complement the players that we already have in the attacking third,” Middleby said.

“We would have preferred to secure his services for the entire season, but unfortunately that wasn-t an option at this stage, with Incheon wanting him back on January 1.

“We were able to extend that until January 11 so Nathan can play in our home matches against Perth Glory and Melbourne Victory after the New Year.

“We-re all excited for Nathan-s arrival in Newcastle and we-re looking forward to seeing him in action for the Jets this coming season.”

Newcastle Jets Members that have not yet renewed have until 4pm tomorrow (Friday, July 26) to renew their Membership and retain their existing seat. After this date, all seats that are not renewed will be released and sold to existing and new Members.

The easiest way to renew your Membership is online at www.newcastlejets.com.au or by CLICKING HERE.